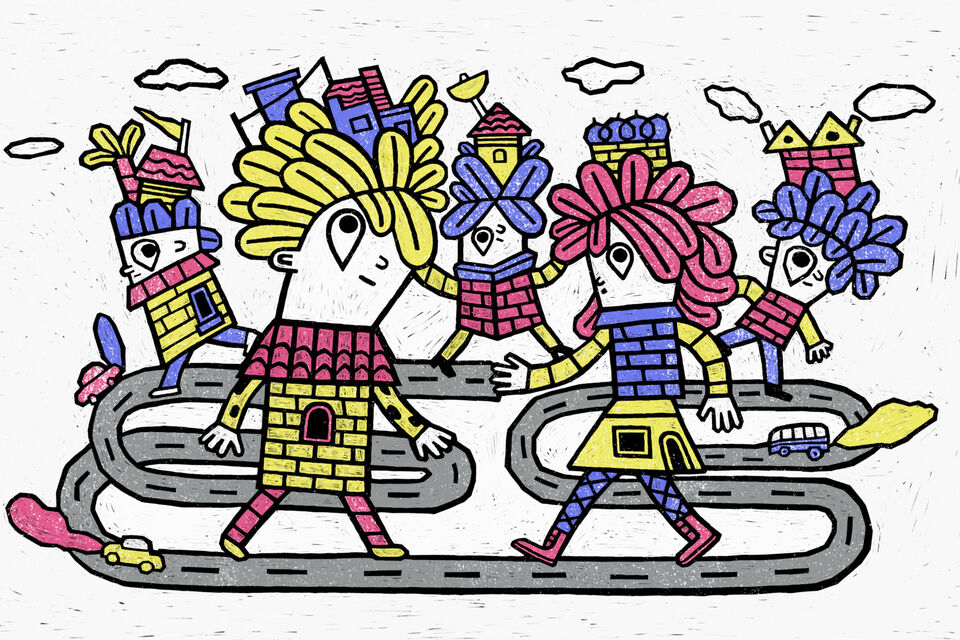 At the heart of any civilization is a city: harnessing its people to build (cathedrals of stone and steel and glass), to gather and invent cuisines, art and music. These are the picture postcard destinations we travel to. But to live in a city is another thing entirely, and to move to a new city is something else again. Does a city serve us, or do we live for the city? For many it's a daily grind and hustle just to be — something we explored in our first theme, El rebusque. The complexity is at once exciting and daunting; it offers opportunity, but also danger. Better keep your wits about you, because what you don't know can hurt you.

Two of our four stories are about the physical complexity of cities — literally how you navigate, and what happens when you can't. In Ciudad infinita, Oliver Perrotet, a young Swiss, arrives in Lima, Peru in 1970 seeking something new, maybe a personal rebirth. He knows nothing about this vast city between the desert and the sea, and there is no map to help him. So Perrotet makes his own, and he starts by riding and recording all 190 of the city’s bus routes. With no experience of cartography, only doggedness and a stereotypically Swiss attention to detail, he creates Lima 2000, the first commercial map of the entire city, taming un monstruo inabarcable (an unmanageable beast) as our host, Daniel Alarcón, calls it. When Daniel returned to the city of his birth as a young adult he depended on Perrotet's work: "Gracias a este mapa comencé a sentirme limeño". It's good to belong.

Perdido en San José is a study of dysfunction in the capital of Costa Rica. Llega a la Iglesia Católica, baja un kilómetro, y por la del parque camina 100 metros al sur. Es la cuarta casa a la izquierda, la de la reja café. In a city without useful street signs, this is how you navigate. So how do ticos (Costa Ricans) go about their daily lives without getting lost? Well, often they don't. Mail workers can’t deliver packages; partygoers don't find their party; and far worse, firemen and social workers arrive too late to save a home — and a child's life.

Our next stories are about what happens when groups clash over physical and cultural space. We explored Fronteras back in March. We now revisit this theme in two powerful dramas, each set in a city undergoing a major social shift.

Iris didn't seek trouble, but trouble found her. Postal de San Salvador is the story of a bus ride she took in 2015, during the height of the gang violence in El Salvador. A young woman sits down next to Iris and starts interrogating her, intimidating her. This woman's dress — dyed blonde hair, leopard-skin tights, lips outlined in red — identifies her as a jaina, girlfriend of a member of the feared Mara Salvatrucha (or MS13). That, and the scar on her stomach that she flashes at Iris: "Mirá, estas son heridas de guerra" (look at my war wounds). She sees Iris's red-dyed hair and suspects she's a jaina from the rival Barrio 18 gang. When the woman threatens to follow Iris off the bus, sudden panic leaves Iris breathless and desperate — "se me fue el aire".

Emos vs. Punks is also about a clash of tribes, and fighting over territory — but different in nature and scale. The emos (emo derives from "emotion") emerged as a counter-cultural movement in teenagers from the '90s: their aesthetic was moody, long hair and bangs, dark colors; maybe an echo of the hippies, or a foreshadow of gender fluidity today. If los emos are soft, los punketos are hard: heavy metal-headed anarchists in leather jackets, military boots, chains, piercings — and fiercely anti-emo. This story tells of the decade-long escalation of, and resolution to, a showdown between these groups in March 2008, at Glorieta de Insurgentes, in Mexico City.

One scene in particular captures the protean nature of the city, where something utterly unpredictable — in this case, the appearance of a group of orange and white-robed Hare Krishna followers — changed the course of a battle between los emos y los punketos (check out the video footage too).

As you listen to this month’s stories, keep your ears perked for El Salvadoran voseo, the chilango slang of Mexico City, and the emphatic diay of Costa Rican Spanish.

Perdidos en San José is about the peculiar (sometimes hilarious) way ticos (or costarricenses) give directions. I use this episode to get students to think about what is behind an address. They have a lot of fun with the confusing way ticos navigate San José. Still, there is a serious side to the story: especially now in our smartphone-enhanced lives, we take for granted that we can navigate our world reliably and efficiently. This isn't so with directions based on landmarks, often references to places which no longer exist. It is as if ticos live in a time of memory rather than the present. This Activity Guide will help your Spanish class explore and discuss different ways of understanding space and how they affect the way we live.

Fátima is a writer, professor, cultural producer, and PhD candidate in Latin American Cultural Studies at the Graduate Center (CUNY). She holds an MFA in Creative Writing in Spanish from New York University.